Traditional colours, geometric graphics and a shade of the past on the new shirts of Cardiff Rugby

Cardiff Rugby, the Welsh club that plays in the United Rugby Championship and also in the European Challenge Cup, has presented the new shirts the team will wear for next season’s games. The ‘Home’ shirt features the traditional combination of Cambridge blue and black while the ‘Alternate’ shirt adopts a different choice of colours to last year. The ‘Third’ game shirt once again focuses on sky blue. These attractive colours are enhanced by refined graphics that make the new shirts unique and exclusive.

The ‘Home’ shirt has a V neck with white trim and details in Cambridge blue and black. The backneck is customised with the club logo and a graphic motif that also appears on the ‘Alternative’ shirt. The sweatband inside the neck bears the motto of the team in the two languages, Welsh and English: Nerth Trwy Undod – Strength Through Unity. The Macron Hero logo appears in a dye-sub print on the right of the chest while the logo of Cardiff Rugby occupies the left. On the back, under neck, is printed the year in which the club was formed: 1876. The design of the new shirt is characterised by dye-sub printed horizontal stripes that start at the shoulders and alternate between the colours Cambridge blue and black, with the latter colour dominating the bottom of the shirt. The shorts are black with side bands that repeat the same alternating black and sky blue colours. The socks are black with two large sky blue bands.

The ‘Alternate’ shirt is another V neck garment and comes in red and black, a traditional alternative colour combination. This shirt too has a sweatband with the team’s motto in two languages, inside the neck. The right of the chest is decorated with a white Macron Hero logo while the club badge appears on the left. The year in which the club was formed, 1876, is printed on the back under the neck. The graphic design that characterises this shirt starts at the bottom, front and back, and features embossed, black geometric lines with the arrow motif borrowed from the team’s badge, which is inspired by the chevron’s in the city’s coat of arms. The black shorts have the same red and black graphics on the sides. The socks are black with a red band just below the top.

The ‘Third’ game shirt is a crew neck garment with a fluo yellow bartack and black and white trim, these same colours also appearing on the sleeve cuffs. The body of the shirt is in sky blue with embossed horizontal bands with fine, tone on tone, diagonal lines inside. The Macron Hero logo is reproduced in black on the right breast with the Cardiff Rugby badge on the other side. Like the first two, this shirt also has a sweat band inside the neck, with the club’s motto in Welsh and English. The ‘Third’ game shorts are in Cambridge blue with black bands at the sides. The socks are also in Cambridge blue with a black top and a thin white band just beneath.

All shirts are Muscle Fit and made from Armevo and Bodytex fabrics for lightness, breathability and maximum strength. 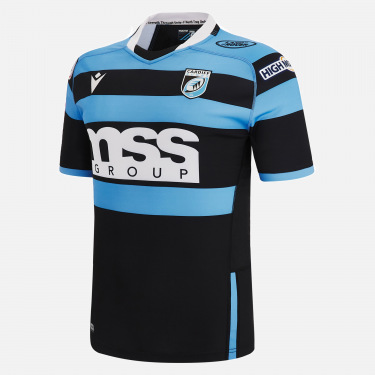 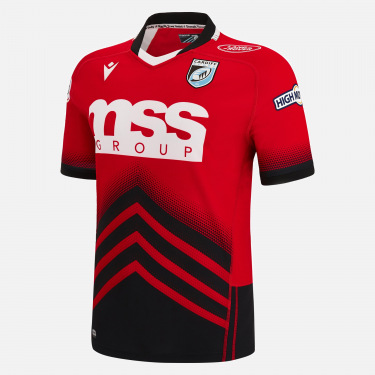