Virtus Segafredo Bologna and Macron, the long-standing technical partner of the ‘Black V’s’, have launched the new “ICONIC” line of merchandise. The official presentation of the first garments in the new line – vests and T-shirts – took place at the Macron Sports Hub in Via Stalingrado, Bologna in the presence of two celebrities: Semi Ojeleye and Ismaël Bako. The two players met fans of the team, took part in a long session of ‘selfies’ and signed vests and T-shirts.

The garments in the new merchandise line are characterised by the iconic of colours of black and white that identify Virtus Segafredo Bologna. The line is being jointly developed with the club. The vests are available in ‘Total White’ and ‘Total Black’ versions, both with the diagonal lettering ‘VIRTUS’ on the chest and a ‘V’ topped by a star. Though fresh and young in appearance, this American college-style graphic also has a hint of vintage about it.

The Macron Hero logo is printed at the top right while that of Segafredo, the club’s main sponsors and owners, appears on the left. The neck and arm holes of the Total Black version are trimmed in white with a fine black line. This line appears in grey on the white version. The same graphics and designs are repeated on the T-shirts which also come in black and in white and again have the name ‘VIRTUS’ in the centre of the chest.

The vests and T-shirts of the ICONIC line are on sale at the Macron Sports Hub in Via Stalingrado, Bologna, and can be purchased through the Virtus Segafredo Bologna section of the macron.com website. Starting tomorrow, 7 December, the garments will also be available from all other points of sale. 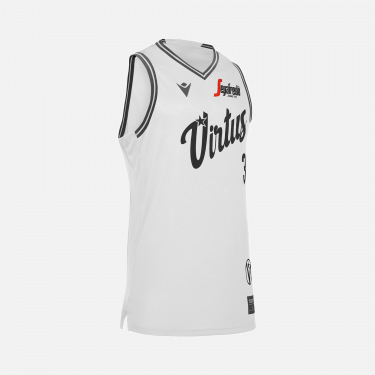 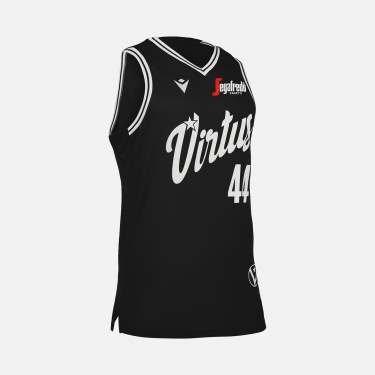