Arminia Bielefeld, the historic German club that will play in 2. Bundesliga next year, and Macron, technical sponsor to “die Arminen”, have revealed the new shirts the team will wear next season. The attention that both club and technical sponsor pay to the question of environmental sustainability is evident again this year and is confirmed by the fact that the new kits are all made from Eco-Softlock, a polyester fabric 100% derived from recycled plastic as certified by the Global Recycled Standard.

The new “Home” shirt is in blue and has a V neck with black, white and blue details. The same details are repeated on the sleeves. The inside of the neck is customised with a black label bearing the words “SPORTCLUB DER OSTWESTFALEN”. The coat of arms of the German city is embroidered at the back of the neck. At the front, the shirt features two diagonal black and white stripes leading from the side to the centre, while the year in which the club was formed – 1905 – is embossed on the back. The Macron Hero logo appears in a silicone print on the right breast while the Arminia Bielefeld badge appears over the heart. The shorts are in black with a three-colour (black, white and blue) knitted insert on the leg. The socks are in blue with a two black and white bands around the top.

The “Away” shirt is in white and has a knitted polo neck with details in three colours (black, white and blue). At the front, the shirt features embossed geometric shapes symbolising the town’s coat of arms, which is embroidered on the back of the neck. The Macron Hero logo and the club’s badge appear on the breast. This shirt too has the year of the club’s formation embossed on the back in tone on tone. The Away shorts are white with black stripes at the sides. The socks are in white too, with a black band at the top.

The “Third” jersey stands out clearly in terms of color compared to the other two jerseys and comes in orange with two vertical white stripes down the sides. The knitted crew neck is trimmed in black and the inserts on the sleeves are black too. The Macron Hero logo appears on the sleeve inserts and in silicone on the breast. The town’s coat of arms is embroidered at the back of the neck as with the “Home” and “Away” shirts, and is accompanied by an embossed “1905” – the year in which the club was formed. The kit is completed by orange shorts and by orange socks with three horizontal bands in black, white and blue at the top.

All of the shirts are Slim Fit. The shirts are made from Eco-Softlock fabric with Eco-Mesh inserts, making them lightweight and fully breathable. 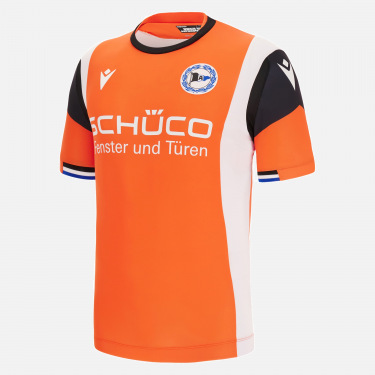 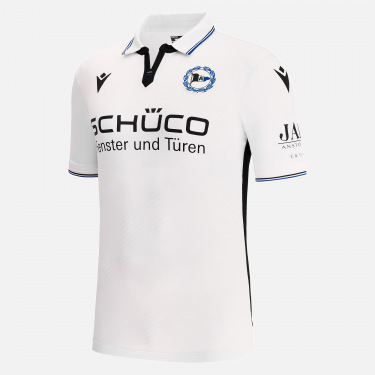 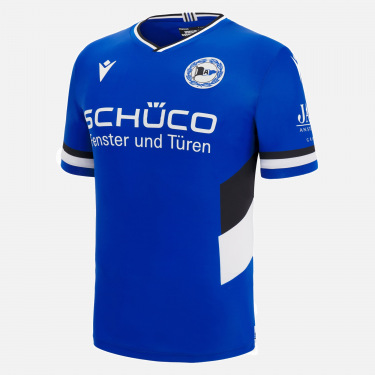