A tough and exciting season lies ahead, but Pallacanestro Reggiana is ready to take on all challengers in the Championship (starting on October 1st with an away match against Universo Treviso) and the Basketball Champions League (with a first away match against the German team Telekom Bonn on 5 October). With only a few days to go before these early matches, the Emilian club has officially presented the new match kits for the Championship and the Cup, featuring lively, innovative graphics and a clear homage to the city the team represents.

As with those of last season, the new shirts of Pallacanestro Reggiana are made from Eco-Fabric, a 100% polyester fabric obtained from recycled plastic, confirming the commitment the club shares with technical partnerMacron on the subjects of sustainability and respect for the environment.

The championship shirts obviously feature the club’s colours, red and white. The new ‘Home’ shirt is white with a red neck band and sleeve cuffs. The inside label is customised with the logo of the club and features a background of the same graphics as the shirt and shorts. This all-over, tone on tone graphic design consists of broken lines of varying size, arranged to create a very striking effect. The graphics appear in red on the sides of the shirt and those of the shorts. The Macron Hero logo is reproduced on the right breast and that of Pallacanestro Reggiana on the left.

The ‘Away’ shirt is in red with a white neck band and sleeve cuffs. The graphic design features the same, tone on tone, broken lines as the ‘Home’ kit on the sides of the shirt and shorts, this time in white. Two horizontal white bands run across the centre front of the shirt. The club has also adopted a ‘Third’ match shirt, again with the same graphics. This shirt is in dark blue with a red and white neck band and sleeve cuffs. The collection also includes a white, crew neck, warm-up shirt with a red neck band and the same tone on tone broken line graphics.

As for the kit that Pallacanestro Reggiana will wear for Basketball Champions League games on courts around Europe, the new ‘Home’ shirt comes in white with a red neck band and sleeve cuffs. The shirt sides and leg bottoms of the shorts are also red. The ‘Away’ kit is all red with white trim. The key graphic motif that characterises both these shirts represents the skyline of Reggio Emilia at chest level, just beneath the shoulders. Accompanying the profile of the city itself is an outline of the Calatrava bridge designed by the architect of the same name, which is clearly visible from the A1 motorway and from the high speed train line. The Cup kit is completed by a warm-up shirt in anthracite grey with two red and white stripes on the shoulders and sides and with the same city skyline on the chest. 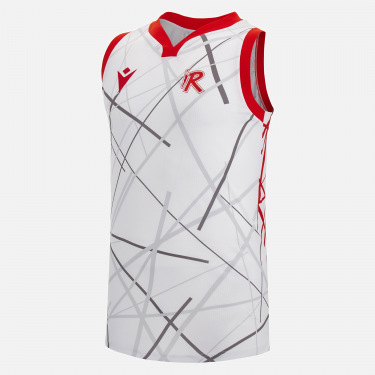 Pallacanestro Reggiana 2022/23 adults' away singlet
As low as USD 75.90
Wanna read more news like this?