MHP RIESEN Ludwigsburg, the top German basketball club that has had an amazing season in the easyCredit Basketball Bundesliga and achieved an excellent result in the Champions League, is preparing for the coming season by presenting the new match kits that the players will wear on national and international courts. The new shirts not only represent the identity of the team but also convey a clear message of sustainability and respect for the environment, being made from Eco-Fabric, a polyester fabric obtained entirely from recycled plastic and certified according to the Global Recycled Standard.

The new ‘Home’ shirt is yellow with a black-trimmed V neck, and with arms and side bands trimmed in the same way. The backneck is customised with a yellow label bearing the team logo and the hashtag #IHRUNDWIR. The front left of the shirt is decorated with a graphic of vertical black stripes, with thicknesses varying to create the effect of fading towards the centre. The Macron Hero logo appears on the right breast, with the club badge of MHP RIESEN Ludwigsburg beneath, while the easyCredit Basketball Bundesliga logo appears on the left over the heart. The same hashtag seen on the backneck (#IHRUNDWIR) also appears on the back of the shirt under the neck. The home kit is completed by yellow shorts with black drawstrings and black bands on the sides and leg bottoms.

The ‘Away’ shirt shares the same design as the ‘Home’ version. The dominant colour, however, is black with yellow trim on the V neck, arms and side bands. As with the Home shirt, the backneck is embellished with the club logo and the hashtag #IHRUNDWIR, which also appears on the back of the shirt under the neck. The graphic on the front left of the shirt, based on vertical stripes of varying thickness that fade towards the centre, is in yellow. The Macron Hero logo appears on the right breast with the MHP RIESEN Ludwigsburg logo underneath, and the logo of Germany's top basketball division appears on the left. The shorts of the Away kit are black with yellow bands on the sides and leg bottoms.

Both shirts are Regular Fit garments, and are made mainly from Eco-micromesh fabric with Eco-mesh inserts. The match kit is complemented by yellow, crew neck, pre-match warm-up shirts that feature the same vertical stripe graphic on the left of the front. 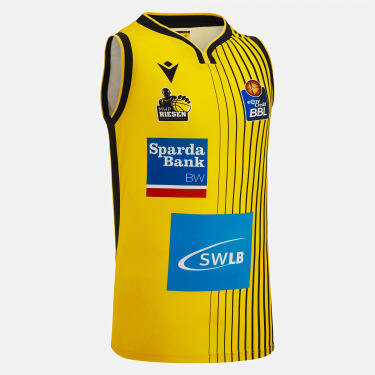 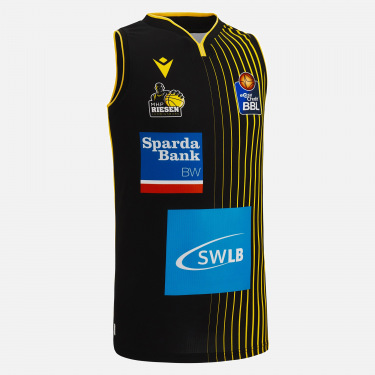