Tradition and elegance in the new Cádiz CF “Home” & “Away” shirts

Cádiz CF, the club that plays in the Spanish Liga, has revealed the new Home and Away shirts that the team will wear in the season due to start in less than two weeks. The new match kits combines the club’s traditional colours with innovative technical and stylistic solutions like the dembossed pattern that characterises the front of the Home shirt.

The club’s “Home 22-23” shirt is yellow, died in the garment. Its knitted Mandarin neck has a blue trim that meets with a triangle on the chest replicating the shape of the Spanish club’s logo and that of Macron. Blue details also appear on the sleeve cuffs and bottom side slits. The backneck is customised with a dark red label and the coat of arms of the province of Cádiz. On the chest, the Macron Hero is silicone printed on the right, and the badge of Cádiz CF on the left.

The most characteristic feature of the new shirt is the graphic with fine horizontal lines produced by dembossing – a technique that presses all areas of the fabric except the areas intended to have a relief appearance. The shorts come in two versions, blue or yellow. The socks too can be either blue with a yellow cuff or all yellow. Both variants have the letters CCF (Cádiz Club de Futebol) and the Macron Hero logo at the front.

The “Away” version in navy blue is characterised by a polo collar with a three-button closure and yellow piping, as are the sleeve cuffs. On both the lower front and back, the shirt features a blue triangular geometric graphic, in sublimation print and optical degradé, that recalls the Cádiz CF logo. The backneck is personalised as in the home version, and the Macron Hero and team crest are in yellow silicone print on the chest. There are two shorts options: navy blue with yellow details or completely yellow. The socks are navy blue with a yellow stripe on the upper edge, the CCF acronym, and the Macron Hero.

The official jerseys are slim fit garments made mainly from Softlock fabric, with micromesh inserts for lightness and breathability. 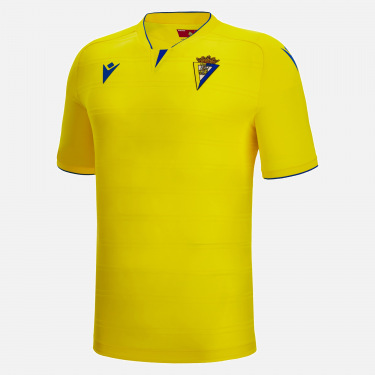 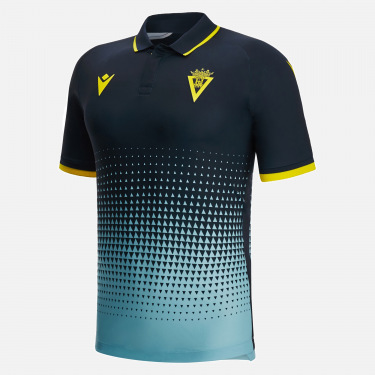