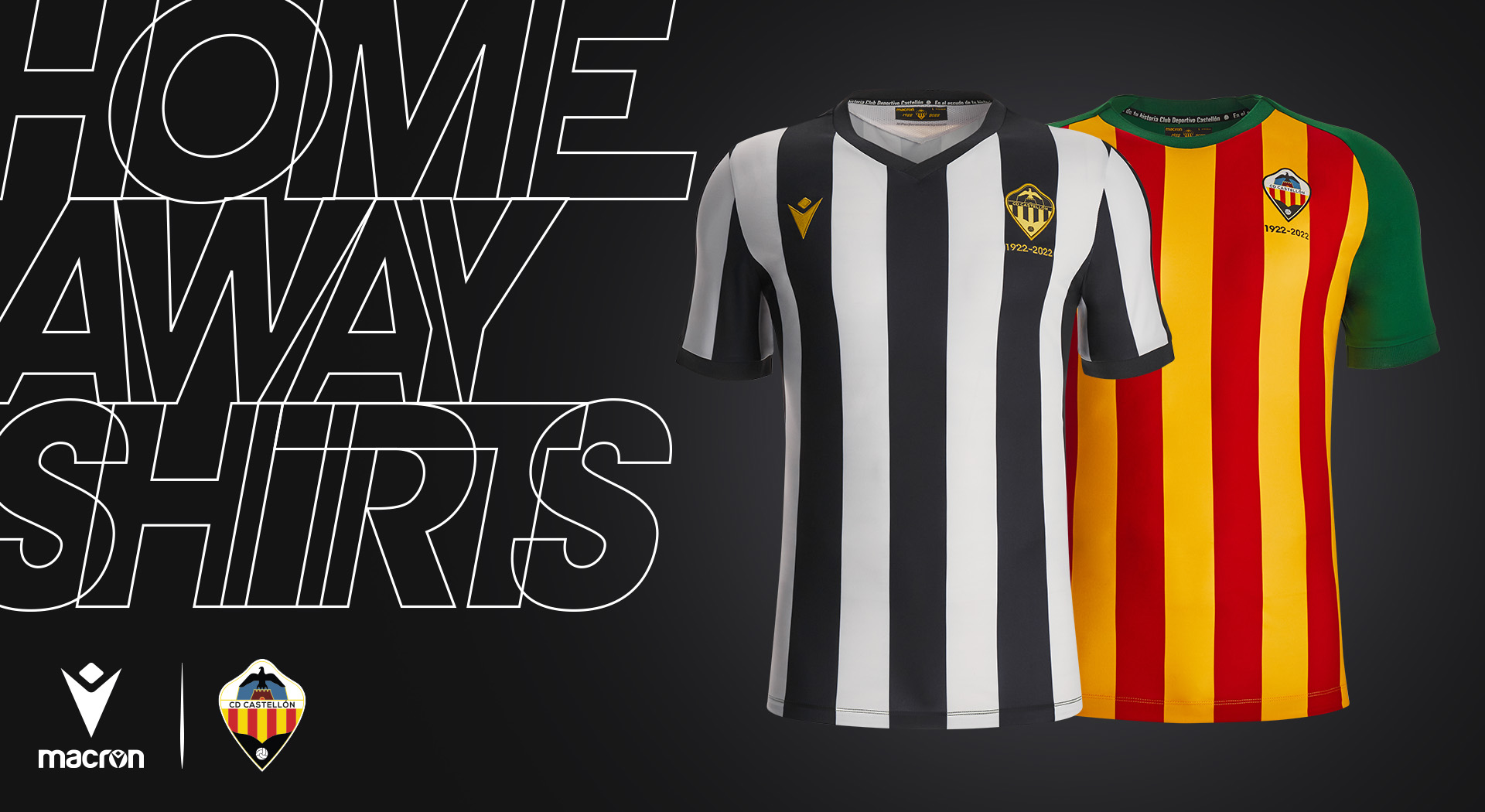 The presentation of Club Deportivo Castellón’s new Home and Away shirts coincides exactly with the club’s 100-year anniversary, since it was founded on 20 July 1922. A momentous occasion that is enhanced on the new match strips by the design and attention to detail along with the colours of the flag of the Valencian Community of which Castellón de la Plana is part.

The new Home shirt has a V-neck and features the traditional black and white vertical stripes. The backneck is personalised with a black label on which the two dates representative of the history of Club Deportivo Castellón, 1922 - 2022, are printed in gold. Also on the inside of the collar is a tape with the repeated anthem, Castellón - En el escudo de tu historia Club Deportivo Castellón, in gold lettering. The same tape is also inserted on the bottom of the shirt. Embroidered in gold on the right breast is Macron Hero, while on the left is the club’s golden badge with the two dates 1922-2022 underneath. The gold embellishes the shirt in all its details such as the Centenary inscription embroidered on the back of the collar. The home strip is completed with white shorts with black drawstrings and white socks with a black upper border.

The sense of belonging to the region that the team represents is fully conveyed by the new Away shirt whose dominant motif is the Senyera Valenciana colours, a symbol of identity and belonging for every Valencian. The new Away shirt has a crew-neck with a dark green collar and shoulders. The central body of the shirt, both front and back, is composed of four vertical red bands on a yellow background, exactly as in the Senyera. The backneck is personalised as in the Home version, as is the tape with the repeated phrase, both inside the collar and on the bottom of the shirt: Castellón - En el escudo de tu historia Club Deportivo Castellón. Embroidered in black on the back of the collar is the word Centenario. Macron Hero is embroidered on the breast in dark green and on the left side there is a patch with the Club Deportivo Castellón badge under which the two dates 1922 - 2022 are embroidered. The shorts and socks are in dark green.

Both shirts have a Slim Fit, the main fabric is Softlock and the presence of micromesh inserts ensures the garments are extremely light and perfectly breathable.